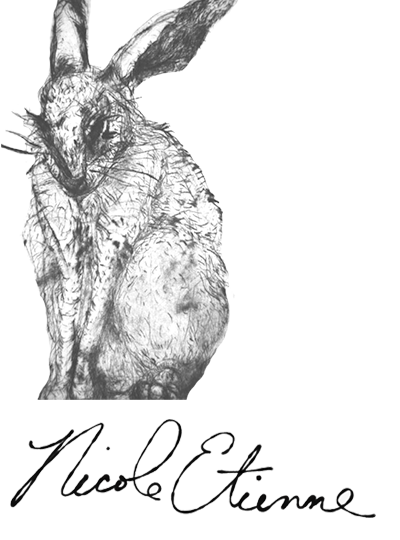 Nicole Eitienne “The Darling Buds of May”

Nicole Etienne’s paintings are amalgams of paint and photography. She covers images printed on canvas with painted layers of luscious viscosity, leaving visible parts of the photographic image to facilitate a poetic conversation between the two media. These works ooze sensuality and emotional resonance yet remain fully grounded in the present moment.

Alix Sloan opened Sloan Fine Art in New York City in 2008 and now operates as a nomadic pop up gallery doing collaborative exhibitions across the USA. Longtime colleagues and friends, Alix Sloan and Bert Green are pleased to bring Nicole Etienne’s work to Chicago for the first time.

Full Article from the artdaily.org

Nicole Etienne ‘s oeuvre encompasses a broad spectrum of portraiture and seascapes which, over recent years, have evolved from pure painterly representation to a heightened sense of magical realism, testing its bounds against sensual expressionism.

In this new body of work, Nicole represents the ocean and its treasures akin to love, there is no beginning, and no end to look to except for timeless depth.

Since the dawn of time, mankind has been mesmerized by sunken treasures. Sailors and adventures have been lured to their demise by the siren sounds of good fortune. The oyster, mother to the pearl, is hidden amongst the drifting sands. Alexandrian glory awaits the one who finds his sunken statue, laid to waste by nature’s hand. Canons and gold lie hidden where they sank, covered by the sands of time. These are all emotions evocative of Nicole’s recent work.

To my eyes, Nicole conjures up the sublime in the ordinary, mystery where there should be dread, passion where calm waters still the lives of ordinary men and women. The daily currents of life, she tells us, carry their own ballast, represented in good or evil, at one and the same time.

We humans have often to navigate these moody waters astride the symphony of nature. Yet we’re often drawn to the mysterious depths that belie our own selves.. The mystery of being shipwrecked, of reaching edenic climes even as we lose all contact with human touch. Doubt, like the swirling seas of life, lap at our pristine shores.

Seascapes, and the promised riches that lie beneath their unlocked ocean surfaces are, in my opinion, the product of Nicole’s own yearning for inner peace, an attempt to understand the her itself, whilst maintaining the outer divisions of superficial appearance.

The sea, with its mirror like surfaces, become reflective searching metaphors, empowering man by the hands of the artist as creator. The paintings seem to me to speak to the human condition, to confront women’s existential anguish in the face of daily human emotions. This is what I see in this series of paintings, and it is this which attracts my interest in swimming across the unfolding tempest of creativity which Nicole unleashes.

Nicole Etienne, New York artist who shows her work internationally, will be at Etienne Gallery on Fourth Street. Beginning Friday, August 7th, 2009, the gallery will present “Into the Garden” – a showcase of luscious nudes, mysterious animals and beautiful fruits – Etienne’s latest work.

Etienne is the daughter of gallery owner, Suzanne Etienne. She is a fourth-generation artist, inspired to be a full time painter by her mother. Originally from California, Etienne currently lives and works in her New York City painter’s atelier. She continues to gather inspiration for her art from traveling the world and living coast to coast.

Following the completion of her MFA in New York, Etienne was invited back to do a solo show in Dublin. The show was entitled LAND WATER SKY and featured paintings of the West Coast of Ireland. The artist and her work were introduced by Eileen Guggenheim, well known New York socialite and art aficionado. Before traveling to Ireland for Etienne’s show, Ms. Guggenheim co-chaired the Tribeca Ball at the New York Academy of Art where guests included former President Bill Clinton, Justin Timberlake and Nicole Miller. Another famed New York artist, Catherine Howe, attended the Dublin reception for Nicole Etienne. The Dublin show was remarkably successful in the current economy; seven large original oil paintings were purchased. As Dublin was dazzled, Ashland will be awed by Etienne’s art.

Indeed, Ashland has already recognized Etienne’s art in selecting her piece entitled Big Night as the A Taste of Ashland 2009 poster and cover art for the event guide.

Immediately following her Dublin show, Etienne was whisked to St. Bart’s in the French West Indies. Eden Rock St. Barts which has long catered to the likes of celebrities such as Greta Garbo, Robert Mitchum and Howard Huges has evolved over the years into a world class art-centric hotel. It has its own art gallery with full exhibition programs each season. The Eden Rock Gallery regularly features work by artists from the New York Academy of Art. Etienne was one such artist recently invited to exhibit and teach painting at Eden Rock Gallery. She will return to New York from St. Bart’s this weekend. Her next destination is Ashland.

Nicole Etienne’s show “Into the Garden” opens to the public on August 7th and will run through August 31st. Come meet the artist at Etienne Gallery on First Friday, reception beginning at 5 p.m.

Ms. Etienne will be exhibiting her latest art work
with Alix Sloan/Sloan Fine Art at the Scope Miami Art Fair

The View from Cill Rialaig: an exhibition of works resulting from a convergence of Irish and American artists and writers in retreat in County Kerry, Ireland.
Gallery Hours: Wednesday – Saturday: 11-6 / Sunday: 12-6
www.lesleyheller.com

Flowers is pleased to announce that it will be hosting the New York Academy of Art‘s 5th Annual Summer Exhibition. The show will open with a reception on Thursday, June 23, from 6-8 pm and will remain on view through August 6, 2011. This highly anticipated group show brings together a wide range of new work by more than 50 established and emerging talents. Comprised of paintings, drawings, limited-edition prints and sculpture, the chosen works will be selected from over 500 submissions by jurors Matthew Flowers, Carter Foster and Julie Heffernan Flowers is an internationally recognized gallery with locations in London and New York. The program in both the UK and US comprises all media by established and emerging artists, is an active publisher of prints and multiples, and has a growing department in contemporary international photography.